Albin Polasek with Mayor Allen Trovillion in Polasek's home and art studio, located at 633 Osceola Avenue in Winter Park, Florida. Trovillion served as the Mayor of Winter Park from 1962 to 1966. A Republican, he later went on to represent District 26 in the Florida House of Representatives from 1994 to 2002.

Polasek, known internationally for his sculptures, retired to Lake Osceola in Winter Park in 1950. The same year that he had moved to Florida, Polasek suffered from a stroke, which paralyzed the right side of his body. Seven months later, he married one of his former students, Ruth Sherwood, who died just two years later. Despite being confined to a wheelchair, Polasek was able to create 18 major works in his later years. In 1961, he married Emily Muska Kubat and the set up the Albin Polasek Foundation, opening up the Albin Polasek Museum & Sculpture Gardens, located in parts of Polasek's home and studio, which featured his personal galleries, chapel, and gardens. On May 19, 1965, Polasek passed away and was buried beside his first wife at Palm Cemetery. 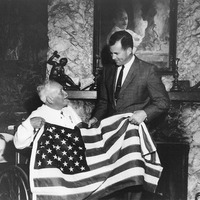