The home and art studio of Albin Polasek, located at 633 Osceola Avenue in Winter Park, Florida. Polasek is a local art legend in Orange County who is also recognized nationally and internationally for his work. Polasek was born in Frenštát pod Radhoštěm, Moravia (now part of the Czech Republic), on February 14, 1879. He later migrated to Vienna, Austria, where he apprenticed as a woodcarver. In 1901, at age 22, Polasek immigrated to the Midwestern United States. At age 25, he began attending the Pennsylvania Academy of Fine Arts in Philadelphia, Pennsylvania, where he studied under Charles Grafly. Two of his most well-known sculptures were created while he was a student: Man Carving His Own Destiny and Eternal Moment. Polasek was granted American citizenship in 1909 and he earned the Prix de Rome in 1910, which granted him a three-year fellowship at the American Academy of Art in Rome, Italy. He also received the Paris Salon for The Sower in 1913 and the George D. Widener Memorial Gold Medal from the Pennsylvania Academy of Fine Arts in 1915 for Aspiration. After completing his studies in Rome, Polasek migrated to New York City, New York. In 1916, when he was 37, the Art Institute of Chicago in Chicago, Illinois, invited Polasek to head its sculpture department. While in Chicago, he sculpted Forest Idyl, Victorious Christ, and The Spirit of Music. In 1927, he was elected as an Associate Member of the National Academy of Design, which is an honorary degree conferred to America's top painters, sculptors, and architects. Polasek also achieved full academician status in 1933.

In 1950, when Polasek was 70, he retired to Winter Park, Florida, where he built a home on Lake Osceola. That same year, he suffered from a stroke, which paralyzed the right side of his body. Seven months later, he married one of his former students, Ruth Sherwood, who died just two years later. Despite being confined to a wheelchair, Polasek was able to create 18 major works in his later years. In 1961, he married Emily Muska Kubat and the set up the Albin Polasek Foundation, opening up the Albin Polasek Museum & Sculpture Gardens, which featured his personal galleries, chapel, and gardens. On May 19, 1965, Polasek passed away and was buried beside his first wife at Palm Cemetery. In 2000, Polasek was named a "Great Floridian," a distinction reserved for those who have made a significant contribution to the state culturally and historically. In 2004, he was inducted into the Florida Artists Hall of Fame. 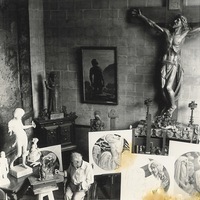