An autographed portrait of Anna Eleanor Roosevelt, which is housed at the Mary McLeod Bethune Foundation, located at 640 Dr. Mary McLeod Bethune Boulevard in Daytona Beach, Florida. Roosevelt was born on October 11, 1884, in New York City, New York, and was commonly known by her middle name, Eleanor. Roosevelt is best known as the First Lady of the United States (FLOTUS) for her husband, President Franklin Delano Roosevelt, who served from March 4, 1933 to April 12, 1945. Before coming to Washington, D.C., she served as the First Lady of New York from 1929 to 1932, when her husband was Governor. Roosevelt's activity while First Lady was controversial at the time, but she has since become respected for her activism on a number topics, including race relations, women's roles in the workplace, civil rights for African Americans and Asian Americans, and the rights of World War II refugees. She also arranged from the appointment of Dr. Mary Jane McLeod Bethune as Director of the Division of Negro Affairs of the National Youth Administration (NYA). Dr. Bethune presented Roosevelt with an honorary degree from her college, Bethune-Cookman College in Daytona Beach, Florida, on March 19, 1953.

Following her husband's death, Roosevelt continued her political career as the first Chair of the United Nations Commission on Human Rights (UNCHR) from 1956 to 1951, Representative to the UNCHR from 1947 to 1953, Delegate to the UN General Assembly (UNGA) from 1946 to 1952, and Chairwoman of the Presidential Commission on the Status of Women from 1961 to 1962. Roosevelt died on November 7, 1962, in Manhattan in New York City.

Copyright to this resource is held by the Mary McLeod Bethune Foundation and is provided here by RICHES of Central Florida for educational purposes only. 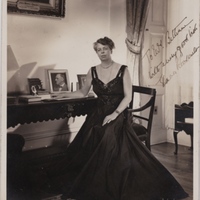