The Tempests at the Firestone Grand Prix of St. Petersburg, 2010

The Tempests at the Firestone Grand Prix of St. Petersburg, 2010 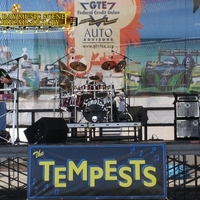