Flyer for a concert for the band, The Tempests on March 12, 1966. The dance was held at The Village, located at 3003 Cypress Street in Tampa, Florida. 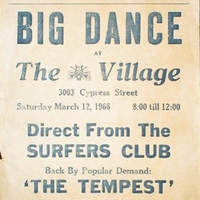