Thomasson, Yoho, and Jones of The Outlaws

Autographed 1 color photograph of The Outlaws performing live. The photograph features, from left to right, guitarist Hughie Thomasson, drummer Monte Yoho, and guitarist/keyboardist Billy Jones. Although the photograph was taken of a much earlier version of the group sometime between 1969 and 1979, the five signatures are from Thomasson, Yoho, guitarist Chris Anderson, drummer David Dix, and bassist Randy Threet, which was the lineup from 2005-2007.

Formed in Tampa, Florida, in 1967 by guitarist and lead vocalist, Hugh "Hughie" Edward Thomasson, Jr., The Outlaws peaked in popularity in the mid-to-late 1970s, with hits such as "Green Grass and High Tides," "There Goes Another Love Song," and "(Ghost) Riders in the Sky." Known by fans as "The Florida Guitar Army," the band's three-part harmonies distinguished them from their Southern rock contemporaries. The band experienced more personnel changes than most musical groups, with at least 45 different members between 1967 and 2015.

Copyright to this resource is held by Ped-Dyn Productions and is provided here by RICHES of Central Florida for educational purposes only. 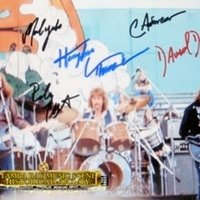