"Bo Diddley" by The Rovin' Flames

"Bo Diddley" by The Rovin' Flames

A 45 RPM vinyl record single of the song, "Bo Diddley," recorded by The Rovin' Flames on Tampa Bay Records at H and H Productions in Tampa, Florida, in June of 1966. The record was produced by Phil Kempin and the song was written by Bo Diddley, a.k.a. Ellas Otha Bates or Ellas McDaniel. The B-side is "Seven Million People." 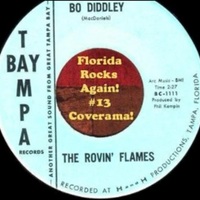