"How Many Times" by The Rovin' Flames

"How Many Times" by The Rovin' Flames

"How Many Times" by Rovin' Flames 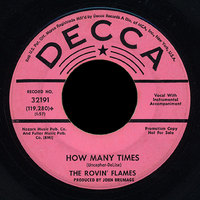