The Rovin' Flames at a Soap Box Derby Parade

The Rovin' Flames at a Soap Box Derby Parade

The Rovin' Flames performing live in the bed of a truck in Downtown Tampa, Florida, at the Soap Box Derby Parade on July 13, 1968. The names of the members are written at the bottom. From left to right, they are listed as Jerry Nickerson, J. R. Maietta, Jay Colding, Jimmy Morris, and Ronnie Goedert. 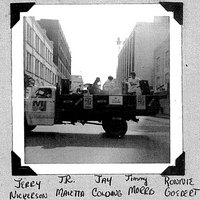