A newspaper article highlighting local club news. The highlights include a meeting for the United Daughters of the Confederacy, as well as the 75th anniversary celebration of the Oviedo Woman's Club (OWC). Following the American Civil War, numerous associations were founded by women to organize the burials, funerals, commemorations, and monuments honoring the Confederacy. The majority of these individual associations were merged into the National Association of the Daughters of the Confederacy, led by Caroline Meriwether Goodlett and Anna Davenport Raines, on September 10, 1894 in Nashville, Tennessee, for daughters, granddaughters, and other female descendants of Confederate servicemen. In 1895, a meeting was held in Atlanta, Georgia, to change the name of the organization to the United Daughters of the Confederacy (UDC). The UDC was officially incorporated in Washington, D.C., on July 18, 1919.

The Oviedo Woman's Club was founded in 1906 as the Oviedo Magazine Club by seven charter members: H. B. McCall, Edith Meade, Georgia Lee Wheeler, Lillian Lee Lawton, Mattie Aulin Wheeler, Milcah Yonge, and Mary King. The first clubhouse was constructed in 1914 and also served as Oviedo's first library. In 1916, the club joined the Florida Federation of Women's Clubs (FFWC) and officially changed its name to the Oviedo Woman's Club. In 1923, the woman's club was federated under the umbrella of the General Federation of Woman's Clubs (GFWC). A new clubhouse was built in 1961 on property donated by R. L. Croom, a former member, which is located at 414 King Street. The Oviedo Woman's Club is involved in many civic projects, including the annual Great Day in the Country Arts and Crafts Festival, the Spring Fundraiser, Tasting Luncheons, and Celebrate Spring Teas.

"Our History." Oviedo Woman's Club. http://www.oviedowomansclub.org/our-community/our-history.html.
"About the UDC." United Daughters of the Confederacy. http://www.hqudc.org/history-of-the-united-daughters-of-the-confederacy/.
Cox, Karen L. Dixie's Daughters: The United Daughters of the Confederacy and the Preservation of Confederate Culture. Gainesville, Fla: University Press of Florida, 2003.
Janney, Caroline E.Burying the Dead but Not the Past: Ladies' Memorial Associations and the Lost Cause. Chapel Hill: University of North Carolina Press, 2008. 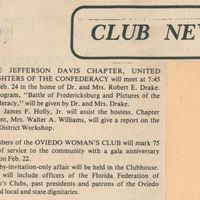