A newspaper article written by Erin Machaby and published by The Oviedo Voice in February of 2006. The article discusses the 75th anniversary celebration the Oviedo Woman's Club (OWC), held on February 10. OWC members were joined by members of the Florida Federation of Women's Clubs (FFWC), as well as a number of Oviedo City Council members. Pictured in the photographs, from left to right, are Mary Gregory, Susan Witty, and Glenne Stoner.

Originally created by Erin Machaby and published by The Oviedo Voice.

Copyright to this resource is held by The Oviedo Voice and is provided here by RICHES of Central Florida for educational purposes only. 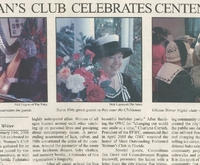