After being recovered in the Pacific Ocean, the Apollo 11 crew was placed into a mobile quarantine unit in case of infection by unknown source on the Moon. This proved to be unnecessary and was discontinued later in Project Apollo. In this photograph, President Richard Nixon (1913-1994) greeted the astronauts on the USS Hornet shortly after they were placed in quarantine.

Apollo 11 was the first space mission where humans set foot on another celestial body, the Moon. Launched from Launch Pad 39A at John F. Kennedy Space Center (KSC) in Merritt Island, Florida, on July 16, 1969, the Apollo 11 fired the third stage engines two and half hours after launch to leave Earth's gravitational pull. The mission was highlighted by the first lunar landing by human beings and Mission Commander Neil Armstrong's (1930-2012) descent from the Lunar Module (LM) to place his foot on the surface of the Moon. He and Lunar Module Pilot Buzz Aldrin (1930-) spent less than 22 hours on the Moon, including two and half hours outside Eagle, their Lunar Module. The crew, which also included Command Module Pilot Michael Collins (1930-), returned to Earth on July 24, 1969. 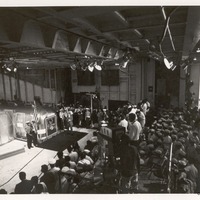