A newspaper article about Dr. John Milton Hawks (1826-1910), the founder of Hawks Park (present-day Edgewater). The article was written by Captain Charles Henry Coe (1856-1954), author of Red Patriots: The Story of the Seminoles and a friend of Dr. Hawks. Dr. Hawks was born in Bradford, New Hampshire, on November 26, 1826. After teaching in New Hampshire, New York, and Georgia, Dr. Hawks eventually graduated from a medical college in Vermont. During the Civil War, Dr. Hawks and his wife, Dr. Esther Jane Hill Hawks (1833-1906), became involved in the abolition movement via the Freedman's Aid Society. Dr. Hawks was assigned to Hilton Head, South Carolina, where they assisted in forming an African-American regiment and served as its surgeon.

Following the war, Dr. Hawks, along with several Army officers, organized the Florida Land and Lumber Company and purchased land in Port Orange, Florida, north of Spruce Creek, for the purpose of establishing a freedmen's colony. Dr. Hawks remained and served as the town's first postmaster. Many of the South Carolinians who migrated here eventually left due to the area's poor soil. The company also attempted to establish a steam sawmill in Port Orange, but the project was ultimately abandoned. In 1865, Dr. Hawks also bought a Spanish land grant for property two miles south of New Smyrna, which the would later retire to and name Hawks Park. From 1866 to 1867, Dr. Hawks served as the Collector of Customs at Pensacola. In 1871, Governor Harrison Reed appointed Dr. Hawks the Superintendent of Schools for Volusia County. During that same year, Dr. Hawks compiled and published the Florida Gazetteer.Dr. Hawks died on April 2, 1910.

Originally created by Charles Henry Coe and published by The Daytona Beach Observer.

Copyright to this resource is held by The Daytona Beach Observer and is provided here by RICHES of Central Florida for educational purposes only. 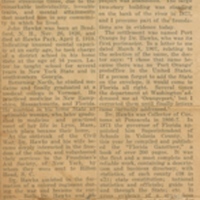