This organization chart, shows the upper management structure of the Generation Systems Division for the Westinghouse Electric Corporation's Power Generation Business Unit (PGBU), effective January of 1995. The chart shows the organization under General Manager Randy H. Zwirn, who joined Westinghouse in 1976. In January of 1996, Zwirn was elected at Corporate Officer for the company. Shortly after this organization chart was published, Zwirn was named Executive Vice President and Chief Operating Officer of the Westinghouse Power Generation Business Unit. As the Chief Executive Officer (CEO) of PGBU, Zwirn followed Frank Bakos, who retired in late 1994. Zwirn left Westinghouse in 1998 to join Siemens AG, an engineering company based in Germany. As of December of 2015, Zwirn serves as the President and Chief Executive Officer (CEO) of Siemens Energy Services, Inc. and CEO of the Energy Services Division in Orlando, Florida, with overall responsibilities for Siemens Energy activities in the Americas. Following the Siemens acquisition, the site organization became known as Siemens Westinghouse and then Siemens in 2003. Zwirn has remained in place at the top organizational position at the Orlando site since the acquisition.

Originally called the Westinghouse Electric Company, George Westinghouse (1846-1914) founded his manufacturing company in Pittsburgh, Pennsylvania, on January 8, 1886. In 1889, he renamed his business the The Westinghouse Electric and Manufacturing Company. Westinghouse's primary products include turbines, generators, motors and switchgear related to the generation, transmission, and use of electricity. The company changed its name to Westinghouse Electric Corporation in 1945. In 1981, the company began to relocate its division headquarters for the Steam-Turbine Generator Divisions from Pennsylvania (turbines from Lester and generators from Pittsburgh) to Orlando, Florida. The Power Generation Business Unit (PGBU) building was located in The Quadrangle, at 4400 Alafaya Trail. Originally, Westinghouse had purchased a large plot of land for future development that extended westward from Alafaya Trail to Rouse Road. The original headquarters was located on several acres of that land parcel close to Alafaya Trail. 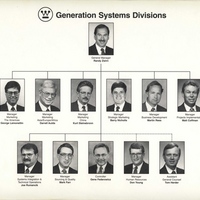