This photograph shows the installation of the first Westinghouse 40MW model W501A gas turbine, located at the Dow Chemical Company's on-site power generation facilities in Freeport, Texas. Dow was a major customer of Westinghouse gas turbine generators and was a pioneer in application of gas turbines for industrial on-site power generation, combined with exhaust heat recovery for production of process steam or additional power. Dow’s first gas turbine, also installed in this way at the facility in Freeport, was a Westinghouse 30MW model W301, which started operation in 1965. In all, Dow installed some 20 Westinghouse gas turbines in Texas and at their site in Plaquemine, Louisiana. Today, this combined heat and power (CHP) application of gas turbines is commonplace and is also known as gas turbine cogeneration.

Originally called the Westinghouse Electric Company, George Westinghouse (1846-1914) founded his manufacturing company in Pittsburgh, Pennsylvania, on January 8, 1886. In 1889, he renamed his business the The Westinghouse Electric and Manufacturing Company. Westinghouse's primary products include turbines, generators, motors and switchgear related to the generation, transmission, and use of electricity. The company changed its name to Westinghouse Electric Corporation in 1945. In 1981, the company began to relocate its division headquarters for the Steam-Turbine Generator Divisions from Pennsylvania (turbines from Lester and generators from Pittsburgh) to Orlando, Florida. The Power Generation Business Unit (PGBU) building was located in The Quadrangle, at 4400 Alafaya Trail. Originally, Westinghouse had purchased a large plot of land for future development that extended westward from Alafaya Trail to Rouse Road. The original headquarters was located on several acres of that land parcel close to Alafaya Trail. 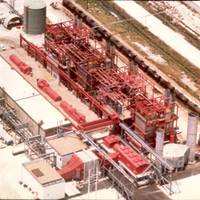