An original letter of correspondence between brothers and business partners Sydney Octavius Chase and Joshua Coffin Chase. The letter discusses a variety of topics, including Sydney's response to an article in The Tampa Tribune about the relationship between the citrus industry and the Florida Citrus Exchange. Chase & Company was established by the brothers in 1884. The company sold insurance and later invested in storage facilities and fertilizer sales. Chase & Company was known mainly for its agricultural interests and maintained a series of citrus groves throughout Central Florida. The company was based out of Sanford and became one of the city's largest employers into the early twentieth century. The Florida Citrus Exchange was founded by a group of growers on June 21, 1909 to help improve production of citrus in the state. Members shared facilities and helped establish operation and shipping standards. Both Sydney and Joshua Chase were hesitant to join the Exchange because they did not want to jeopardize the business they had successfully managed. Chase & Company eventually became a part of the Exchange, but backed out three years later.

"Sydney Chase Sr. (1860-1941)"
"Our Heritage: The History of Seald-Sweet"
"Development of Marketing Citrus Fruits in Florida"
Fifty Years of Citrus

Dear Josh:
Have Tampa Tribune of 17th containing Coreys oration attacking the enemies of the citrus industry and generally trying to disrupt a real get together making movement amongst all marketing organizations of the state including the Citrus Ex.
How does he or the Growers expect the Clearing Ho. to continue in face of Coreys attempt to have them repudiate the amendments to Constitution and By-Laws of the original organization which provided for creation of an operating Com. & for them to have the management of the organization in their control as well as to select a manager. If they succeed in repudiating the final get together agreement which made it possible for the Independents to unite with the organization they will automatically release every Independent from the contract they signed & Coreys threat they will not be free from the binding provisions of their contracts is all bunk. If the Directors are forced to break the last hour agreement let them do it & then withdraw. I would rather operate our groves on no profit [. . .]

[. . .] basis for a year or so than have Coachman & his bunch run us into a corner.
I suggested Jno Taylors name before suggesting Pratts. L.B. questioned Taylors qualifications for the job but never questioned his fitness otherwise. If John is selected by the Directors he will probably feel under obligations to the Coachman bunch though I hesitate to think so myself. I have the highest regard for Taylor integrity, fairness etc.
It’s a rather shame all this mess has been result of scheming of the Coachman bunch working under cover of an unborn cooperative organization as yet never having shipped any citrus, unless within the last few days. 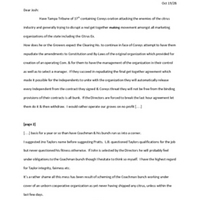