A booklet for the building dedication ceremony of Westinghouse Electric Corporation's Steam Turbine-Generator Division World Headquarters on November 6, 1983. As the decade of the 1970s was coming to a close, Westinghouse decided to consolidate and relocate the headquarters functions for Steam Turbines and Electric Generators to Orlando, Florida, on property they purchased across the street from the University of Central Florida. They had been located with their respective manufacturing locations at opposite ends of Pennsylvania for over 60 years: Generators in East Pittsburgh, and Steam Turbines in Lester, just outside of Philadelphia. In June of 1980, a small startup team arrived in Orlando, and by the late summer of 1983, the new headquarters building had been designed and constructed, and was ready for occupancy. On November 6, 1983, this booklet was distributed as part of a dedication ceremony. It also describes the many new features of the building, which was designed to facilitate teamwork, improve communication internally and with customers, utilize the latest designs in modular office furniture and information systems technology, and be a showcase for customers and potential customers.

Copyright to this resource is held by Westinghouse Electric Corporation and is provided here by RICHES of Central Florida for educational purposes only. 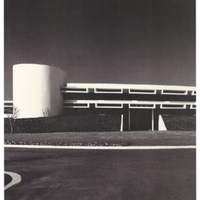