A guide to turbine element selection. This booklet was produced by Westinghouse Electric Corporation's Steam Turbine Division in 1973 as an applications guide for customers, power plant engineers, and Westinghouse salesmen in the field. At the time, the Steam Turbine Division was located at the site of the old Westinghouse factory in Lester, Pennsylvania. In 1982, the Steam Turbine Generator Division moved its office personnel from Pennsylvania to Orlando, Florida. The new World Headquarters building was located at The Quadrangle on Alafaya Trail, across the road from the University of Central Florida (UCF). In 1998, Westinghouse (then the CBS Corporation) sold its Power Generation Business Unit to Siemens, which, as of 2016, occupies the property at the Quadrangle.

Originally called the Westinghouse Electric Company, George Westinghouse (1846-1914) founded his manufacturing company in Pittsburgh, Pennsylvania, on January 8, 1886. In 1889, he renamed his business The Westinghouse Electric and Manufacturing Company. Westinghouse's primary products include turbines, generators, motors and switchgear related to the generation, transmission, and use of electricity. The first Westinghouse steam turbine, a 1500kW unit, was placed in service at Hartford Power and Light Company in 1901. Since that time, Westinghouse, or Westinghouse licensees, have supplied approximately half of the steam turbine generators placed in service in the U.S. and around the world. During the late 1960s and early 1970s, Westinghouse steam turbine engineers designed and developed a series of "turbine elements" called "Building Blocks." These standardized designs for the high pressure (HP), intermediate pressure (IP), and low pressure (LP) sections or elements of the full steam turbine unit comprised the full range of Westinghouse Steam Turbine products, the largest of which were rated at some 1600MW. Turbine building block designs were developed for both fossil (3600RPM) and nuclear (1800RPM) applications. 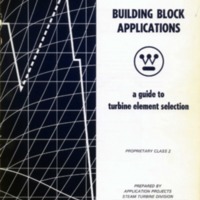