The Maitland Courier issue published on December 24, 1885. The Maitland Courier was established in 1885 by C. F. Townsend, its editor and publisher. The newspaper was published every Thursday and it's estimated circulation between 1886 and 1887 was 559 to an area of residents with an estimated population of 1,300 by 1887. This edition features articles on topics such as medical and agricultural advice, jokes, the opening of the Seminole Hotel, British Revolutionary War officer Major John André (174-1780), sectional amiability between the North and South following the end of the war, settlers in Florida, the development taking place in Altamonte, an open letter to taxpayers, local events to celebrate the holidays, the staff’s contention with a loud rooster, the comings and goings of Maitland’s residents, decisions made at the last town meeting and the members of the board, scientific experiments conducted in the interest of industrial innovation, weather, temperance, and religious readings.

Originally published by The Maitland Courier and C. F. Townsend. 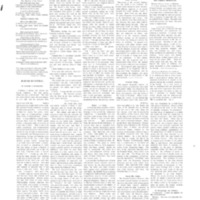