The "Maitland Section" of The Winter Park Herald issue published on June 10, 1926. The Winter Park Herald was a weekly publication that was published between 1922 and 1959. This special section highlights the history and interesting features of Maitland, Florida. Some topics discussed in this issue include the opening of the Bank of Maitland, the Maitland Electric Shop, civil engineer L. L. Condert, the Maitland Plumbing Company, Brown's Store, the history of Maitland, the Inter-City Realty Company's sponsorship of a new subdivision on Lake Catherine, the history of Greenwood Gardens, the Maitland Lumber Company, the planned construction of a new arcade, the White Way Motor Company, and the Maitland Realty Company. 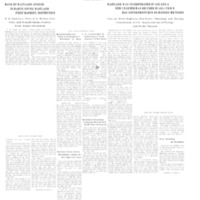