The Orange County Citizen issue published on July 25, 1911. This edition features articles on Maitland, Florida. Such topics include the various groves in Maitland, the various churches, the Maitland Library, a proposed traction line to be built by the Florida Citrus Railway Company,the residences of several residents, Chadbourne Hall, convict leasing, the cotton industry, the Winter Park Fruit Company, the Orlando Irrigated Farms Company, and the town of Oakland.

The Orange County Citizen was originally published as a weekly newspaper by Dr. Geiger (first name unknown) of Apopka, Florida. The paper was known for having a morally sound tone due to its publisher's profession as a Baptist preacher. However, after taking the position of a missionary, Dr. Geiger gave the paper up to A. B. Newton, who represented Winter Garden in the Florida Legislature. Newton kept up the moral tone of The Orange County Citizen, but soon found that he was unable to continue publishing the paper due to his other obligations. Newton then sold the paper to C. E. Howard, who was also the editor of The Orlando Reporter-Star. Under Howard, The Orange County Citizen continued it's moral tendencies and greatly supported Prohibition. Howard continued to run the newspaper weekly for seven years, until he eventually sold it to Arthur Ivey, a reporter for The Reporter-Sentinel. Ivey discontinued publication shortly thereafter. 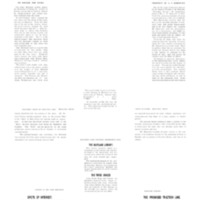