A letter from Orlando Postmaster Lucius A. Bryant, Jr. (ca. 1919-2012) to Germain Gerin. In the letter, Bryant invites gerin to visit the Downtown Orlando Post Office in Downtown Orlando, Florida. Gerin, an employee of a post office in Paris, was visiting her son, John Gerin, for Christmas. John was a French exchange student studying at Bishop Moore High School and living with Richard Rupp's family.

After serving in the U.S. Army during World War II, Bryant settled in Orlando's College Park neighborhood. At the time of his death in 2012, Bryant was the longest-serving postmaster for Orlando, a position that he held from 1951 to 1983. In 1952, William Hamer Beardall, Jr. (1890-1984) appointed Bryant to the local aviation advisory board, which he served on for 22 years. 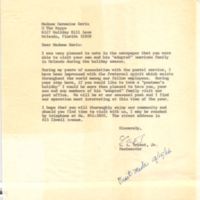