A letter from E. R. Trafford to Henry Shelton Sanford, dated April 17, 1884. In the letter, Trafford informed Sanford that he had acquired a "suitable form of deed for the transfer of the MacKinnon lands to the trustees." He added that the lands had not yet been deeded but that some sales were anticipated soon. Though the exact location of the MacKinnon lands is unknown, it is known that they were in Polk County and accessible by the South Florida Railroad. 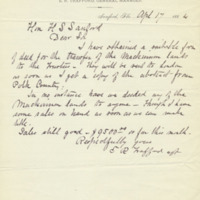