A letter from E. R. Trafford per William Beardall to Henry Shelton Sanford, dated April 13, 1884. In the letter, Trafford requested Sanford's signature for six land deeds. Five of the six deeds were in the town of Sanford, Florida or within close proximity to the town. The sixth deed, purchased by the Florida Commercial Company, was for land in Alachua County. The purchasers for the other five deeds were John Davis, Stephen J. Drawdy, Henry L. DeForest and E. B. Vandeman, and Anna M. DeForest. 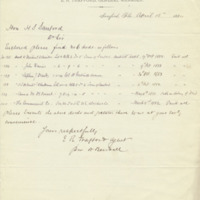