A letter from E. R. Trafford to Henry Shelton Sanford, dated April 9, 1884. In the letter, Trafford provided a number of updates regarding the City of Sanford, Florida. First, he included several land grant certificates that awaited approval from the federal government. He expressed hope that Henry Sanford's "influence would push up" the issue on the government's priority list. Trafford also informed Sanford that "all the hotels close this week so I suppose things will quiet down." He also informed Sanford that the company had made "as much these last three months as the whole past fiscal year," noting that sales had reached $16,000 over a three month period. Among other topics, Trafford also informed Sanford that logs were arriving in Sanford, Florida via shipping on the St. Johns River. 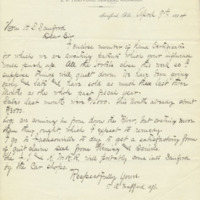