A letter from E. R. Trafford to Henry Shelton Sanford, dated April 24, 1884. The letter provided confirmation that Trafford received fived deeds that he had previously sent to Sanford for signing. He also updated Sanford on the status of several land grant requests to the federal government, adding that "some of our patents [land grants] are at Gainesville[sic]." 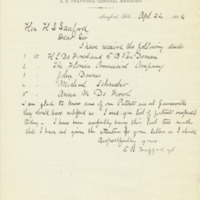