A letter from E. R. Trafford to Henry Shelton Sanford, dated April 26, 1884. The letter asked Sanford to sign and return a deed made out to Homer G. Monson. 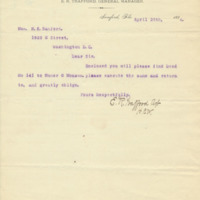