Letter from E. R. Trafford per William Beardall to Henry Shelton Sanford (May 5, 1884)

Letter from E. R. Trafford per William Beardall to Henry Shelton Sanford (May 5, 1884)

A letter from E. R. Trafford per William Beardall to Henry Shelton Sanford, dated May 5, 1884. In the letter, Trafford requested Sanford's signature for two deeds, both in the City of Sanford. One deed was for Ida Gumpert, the other for George Blakemore. 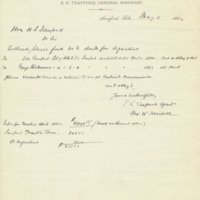