Letter from E. R. Trafford per William Beardall to Henry Shelton Sanford (May 9, 1884)

Letter from E. R. Trafford per William Beardall to Henry Shelton Sanford (May 9, 1884)

A letter from E. R. Trafford per William Beardall to Henry Shelton Sanford, dated May 9, 1884. In the letter, Trafford requested Sanford's signature for nine deeds, all for five acre lots of land within the Sanford grant. These lots were designated for Swedish immigrants who worked for Sanford. As Trafford wrote, "the above Swede Emigrants are men who worked out their year for the company as per contract."

The original emigration of laborers from Sweden came in 1871. Growing frustrated by race-related violence between the local whites and blacks laborers, Sanford sought to hire foreigners to replace the workforce for his two groves in Sanford, Florida. In May 1871, Sanford brought 33 migrants from Sweden to work on his two Sanford groves, first St. Gertrude's and later Belair. The Swedish workers, 26 men and 7 women, cost Sanford $75 each. According to the work contracts, Sanford was to provide housing and rations for each worker as well as a parcel of land for those satisfactorily completing their one-year contracts, Sanford hired an additional 20 Swedes the following year, in November 1871.

E. R. Trafford, meanwhile, was a company agent for the Florida Land and Colonization Company (FLCC) from 1882 to 1886. He served as the company’s local representative, managing the company office in Sanford, Florida. He was selected by the board of the FLCC, despite resistance from the President and Chairman of the Board, Henry Shelton Sanford. Unlike his predecessor, James Ingraham, Trafford provided Henry Sanford with little confidential, first-hand information about events in Florida. As a result, Sanford regularly advocated for Trafford’s replacement. However, the company’s other board members, distrustful of Henry Sanford’s business acumen, retained Trafford precisely because his first loyalties remained with the company in London and not Henry Sanford. His tenure as FLCC agent is reflective of the often tense relationship between Henry Sanford and his fellow board members as well as the increasingly limited influence Sanford had in company affairs. The FLCC was a joint-stock venture that invested in Florida land development and sales in the 1880s and early 1890s. The company was formed by Henry Shelton Sanford with help from a group of British investors. Located at 13 Austin Friars in London, the company was officially registered in London on June 10, 1880. With the formation of the FLCC, all of Henry Sanford's Florida properties were transferred to the company in exchange for a ₤10,000 cash payment and another ₤50,000 in company stock. Sanford was named President and Chairman of the Board. In 1880, the company owned 26,000 acres scattered across Florida, including in the cities of Jacksonville, St. Augustine, and Sanford, as well as in Alachua and Marion counties. Almost from the outset, there was serious friction between the British board members and Henry Sanford. Disagreements erupted over business strategy, as Sanford frequently proposed initiatives deemed too bold for the cautious British investors. As a result of consistently meager profits from its inception, following Henry Sanford's death in 1891 many of the investors lost the motivation to continue. On September 15, 1892, the various directors acted to dissolve the company. Its assets, including roughly 65,000 acres of Florida land, were divided among shareholders. 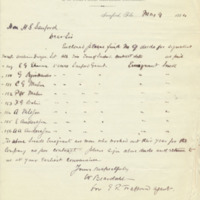