A letter from E. R. Trafford to Henry Shelton Sanford, dated June 16, 1884. In the letter, Trafford indicated that he enclosed deeds for H. B. Anthony, Eliza W. Travis, and Washington Pullis and he requested that Sanford sign and return them. 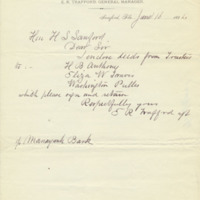