A letter from E. R. Trafford to Henry Shelton Sanford, dated April 24, 1884. The letter appeared to be a response to an earlier inquiry by Sanford regarding deeds. Trafford indicated that "the deeds to the Alachua lands are not in this office - I think they must be in London." 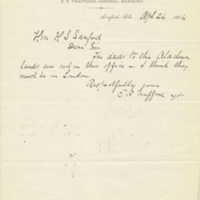