A letter from E. R. Trafford per William Beardall to Henry Shelton Sanford, dated June 22, 1884. In the letter, Trafford requested Sanford's signature for three enclosed deeds, two of which were in the City of Sanford, Florida, the third was near Henry Sanford's St. Gertrude's Grove. 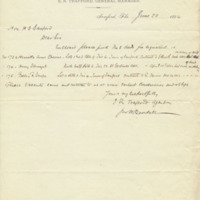