A letter from E. R. Trafford to Henry Shelton Sanford, dated November 21, 1884. Topics in the letter included discussion of lands for sale and the need to set prices for the company's "lake region lands" in Polk County. Trafford also indicated that he was "a little alarmed at the burning down of our wooden towns - Palatka, Brunswick, Ga. - DeLand saw mill," adding that he was "taking every precaution here." Lastly he noted that "people are swarming into Jacksonville and all coming up the river - every prospect of a good winter business." 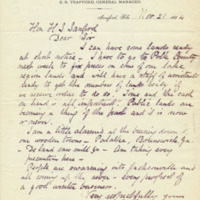