A letter from William Beardall to Henry Shelton Sanford, dated November 26, 1886. Contents of the letter included the purchasing of 320 acres near Winter Haven for the Florida Land and Colonization Company (FLCC). He noted that the land was valued at $30 an acre and estimated that the presence of an unspecified Presbyterian College in the area would enhance the land value. Beardall also provided an update on affairs in Sanford, Florida. In particular, he wrote that he was "working now to secure the erection" of a "Palmetto Fibre Manufactory" in Sanford, an enterprise that he figured would produce five tons of fiber per day and employ upwards of 200 workers. The factory in question was proposed by the Diamond Match Company. However, he explained that there was competition with Alexander St. Clair Abrams who was trying to persuade the company to locate the Fiber Plant in Tavares. St. Clair Abrams was a lawyer who had previously worked with the FLCC to negotiate a bid for a million-acre plot of land from the Internal Improvement Fund Board. When the FLCC failed to finalize the bid, however, St. Clair Abrams sued the company and later Henry Sanford for compensation for his services rendered during the period. At the time of Beardall's 1886 letter, St. Clair Abrams' affiliation with the company had long since ended and he was in the process of a protracted lawsuit against Sanford, a suit that remained unsettled at the time of Sanford's death in 1891. Beardall warned that the FLCC would probably need "to give them land for the factory and a wharf lot near the Saw Mill in order to secure them at Sanford." This deal, he added, might also lead to an eventual paper mill as well, built by the same company. He ended his letter with some discussion of building a potential railroad depot in Sanford.

William Beardall was an Englishman who worked for the FLCC at its local office in Sanford, Florida. He served as an assistant to the company agent, E. R. Trafford. He had worked previously for the Scottish industrialist Sir William MacKinnon before joining the FLCC, a joint-stock venture that invested in Florida land development and sales in the 1880s and early 1890s. The company was formed by Henry Shelton Sanford with help from a group of British investors. Located at 13 Austin Friars in London, the company was officially registered in London on June 10, 1880. With the formation of the FLCC, all of Henry Sanford's Florida properties were transferred to the company in exchange for a ₤10,000 cash payment and another ₤50,000 in company stock. Sanford was named President and Chairman of the Board. In 1880, the company owned 26,000 acres scattered across Florida, including in the cities of Jacksonville, St. Augustine, and Sanford, as well as in Alachua and Marion counties. Almost from the outset, there was serious friction between the British board members and Henry Sanford. Disagreements erupted over business strategy, as Sanford frequently proposed initiatives deemed too bold for the cautious British investors. As a result of consistently meager profits from its inception, following Henry Sanford's death in 1891 many of the investors lost the motivation to continue. On September 15, 1892, the various directors acted to dissolve the company. Its assets, including roughly 65,000 acres of Florida land, were divided among shareholders.

Originally created by William Beardall.
Donated to the Connecticut Historical Society after 1901.
Loaned to the Tennessee State Library and Archives for processing until June 1, 1960.
Donated to the General Henry S. Sanford Memorial Library, Sanford Museum in 1960. 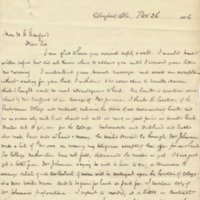