In March of 1943, the first U.S.-designed and -manufactured jet engine went on test for the Westinghouse Electric Corporation, 15 months after the signing of a contract with the U.S. Navy's Bureau of Aeronautics (BuAer). This first engine, with a 19-inch intake diameter, was designated the WE19A, had a thrust of 1130 pounds, and weighed 827 pounds. This photograph shows the improved version of the first engine, the W19XB, circa 1944.

Lagasse, Paul D. "The Westinghouse Aviation Gas Turbine Division 1950-1960: A Case Study of the Role of Failure in Technology and Business." M.A. thesis, University of Maryland at College Park, 1997, page 4. 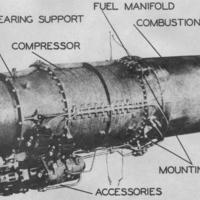