The first flight test WE19B under a Goodyear FG-1 Corsair airplane. The WE19B was a improved version of the first engine, the WE19B (later known as the J30) was flight tested in January of 1944 as a booster unit on a Chance Vought Corsair FG-1 fighter jet. The engine delivered 1365 pounds thrust and weighed 731 pounds.

Copyright to this resource is held by Tommy H. Thomason and is provided here by RICHES of Central Florida for educational purposes only. 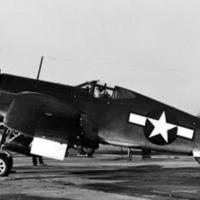