Westinghouse Electric's J30 jet engine, originally known as the J19B, was a simple and robust unit with six-stage compressor, annular combustor, and single-stage turbine. The J30 initially gave 1,200 pounds of thrust, but improved to 1,600 in production versions. The engine's first flight was under a FG Corsair in January of 1944. It was developed into the smaller J32 and the Westinghouse J34, an enlarged version which produced 3,000 pounds of thrust. 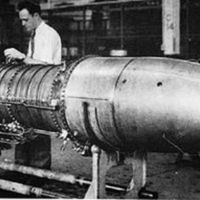