Evolution of the Central Station Steam Turbine in the United States

Evolution of the Central Station Steam Turbine in the United States

Copyright to this resource is held by Ronald L. Bannister and George J. Silvestri, Jr. is provided here by RICHES of Central Florida for educational purposes only. 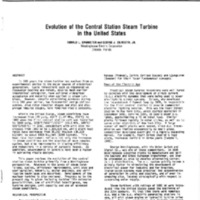