A diagram of the W201 U.S. Steel blast furnace gas turbine. The unique application of a modified version of Westinghouse Electric Corporation's W201 (rated at 20,000) was installed at South Works, a U.S. Steel manufacturing plant in Chicago, Illinois. The W201 was the first direct drive gas turbine developed by Westinghouse and was used to drive a 12,500-standard cubic feet per minute fan to blow air into a blast furnace. The design requirement was to use blast furnace exhaust gas as its fuel and the installation included an external burner. 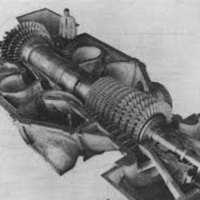