The first pre-engineered combined-cycle power plant installed by the West Texas Utilities Company at its power station in San Angelo, Texas. The Westinghouse Electric gas turbine used for that application was a supercharged model W301, nominally rated at 25MW. The rating on the steam turbine was 85MW, for an overall combined-cycle plant power rating of 110MW, and Thermal efficiency achieved was more than 39 percent, the record for gas-fired power plants in the U.S. for quite some time. 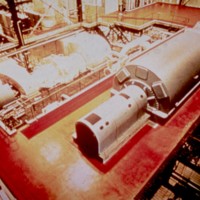