The W501A, rated at 37MW, was introduced by Westinghouse Electric in 1968 as a direct successor to the W301. The first W501A was installed at Dow Chemical Company's plant Freeport, Texas. 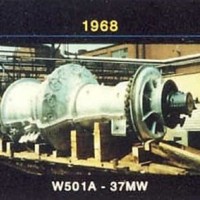