The Westinghouse 501AA (W501AA) gas turbine, rated at 58MW, was introduced in 1971. The turbine is shown here on railcar at Westinghouse Electric facility in Lester, Pennsylvania, with executives of the Gas Turbine Department's Small Steam and Gas Turbine Division. 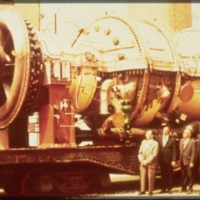