A drawing of the internal design and construction of Westinghouse Electric's 100 MW-class Westinghouse 501D (W501D) gas turbine, which was the first to operate at 2000F rotor inlet temperature in 1975. This design included a generator drive feature, original with Westinghouse and later adopted by others. This is ideal for heat recovery applications and avoids the need for a high-temperature flexible drive coupling in the exhaust end, which is characteristic of earlier designs of others. Also, the two-bearing rotor design avoided the need for a high-temperature center bearing buried in the hot section of the engine, which was also characteristic of earlier designs of others. Westinghouse gas turbines featured their patented tangential exhaust casing struts designed to maintain rotor alignment. 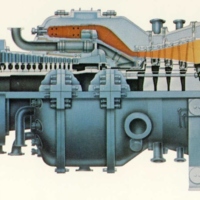