The development of the advanced Westinghouse 501F (W501F) gas turbine began in 1987 as a joint engineering program with Mitsubishi Heavy Industries, a long-time licensee of Westinghouse. The introductory rating of the 501F was 150MW. The first four units were installed at the Florida Power and Light Company's Repowering Project in Fort Lauderdale, Florida, and went into commercial operation in 1993. 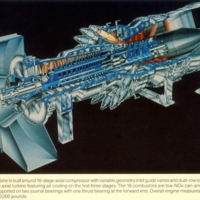