A chart showing the growth (power rating vs. combined cycle efficiency) of the advanced Westinghouse 501F (W501F) gas turbine from its introductory rating of 150MW in 1988 to 181MW in 1998, at the time of that Siemens acquired Westinghouse's gas turbine operations. This engine was adopted by Siemens as its primary 60Hz offering and renamed the model SGT6-5000F. This chart was used in a Westinghouse Combustion Turbine product line presentation by Keith Johnson around 1998. 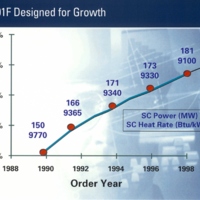