Three Westinghouse 251B9 (W251B9) gas turbines were sold to Rolls Royce for the Godavari Power Project. in Kakinada, India. This photograph shows delivery of one of the gas turbines to the site by elephant-escorted transport. 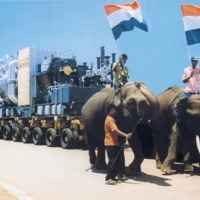