A model of Westinghouse 501D5 (W501D5) EconoPac-packaged simple-cycle power plant around 1983. This diagram illustrates the arrangements of all major components and subsystems. A full gas turbine power plant arrives at site as a set of prepackaged modules for quick field assembly. a glycol cooler was used for hydrogen-cooled generator, which was standard scope before large air-cooled generators became available for the application. 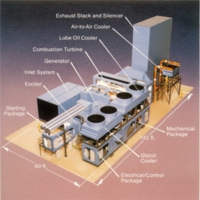