The Public Service of Oklahoma's (PSO) Power at Combined Efficiency (PACE) 260 at the Comanche Power Station in Lawton, Oklahoma. Comanche was the first of the Westinghouse Electric's PACE plants installed in 1973. After several upgrades and modifications, the plant continues to be used by PSO more than 40 years later. PACE combined-cycle plants are comprised of two Westinghouse 501 (W501) gas turbines and a 100 MW Westinghouse steam turbine. 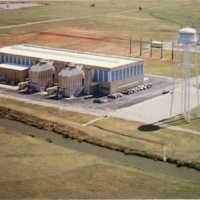