Capital Cogeneration's 450MW Westinghouse 501D5 (W501D5) gas turbines in Pasadena, Texas. This power plant was built by H. B. Zachry Company from 1983 to 1984 as is considered the first Westinghouse PURPA plant (named in reference to the Public Utility Regulatory Policies Act). The pipe in foreground delivers Qualifying Facility (QF) steam to adjacent chemical plant. The plant is now known as the Clear Lake Power Plant is owned by Calpine Corporation. 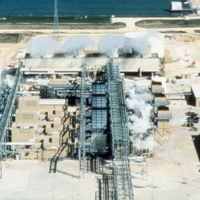