The first advertisement for the Westinghouse 501F (W501F) combustion turbine in June of 1988. The 150MW-class (introductory rating) W501F was developed from 1987 to 1989 as a joint engineering program between Westinghouse Electric and Mitsubishi Heavy Industries. The W501F evolved in the tradition of Westinghouse's proven design features listed on this diagram. Changes to the design include canted combustors, shortened transition ducts, and a bolted and pinned compressor rotor. Up to that time, through the Westinghouse 501D5 (W501D5)A, compressor discs were shrunk onto the rotor shaft. 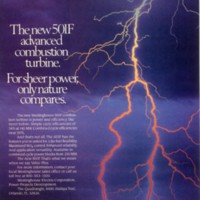